Mac Talks Classics: A return to the classroom 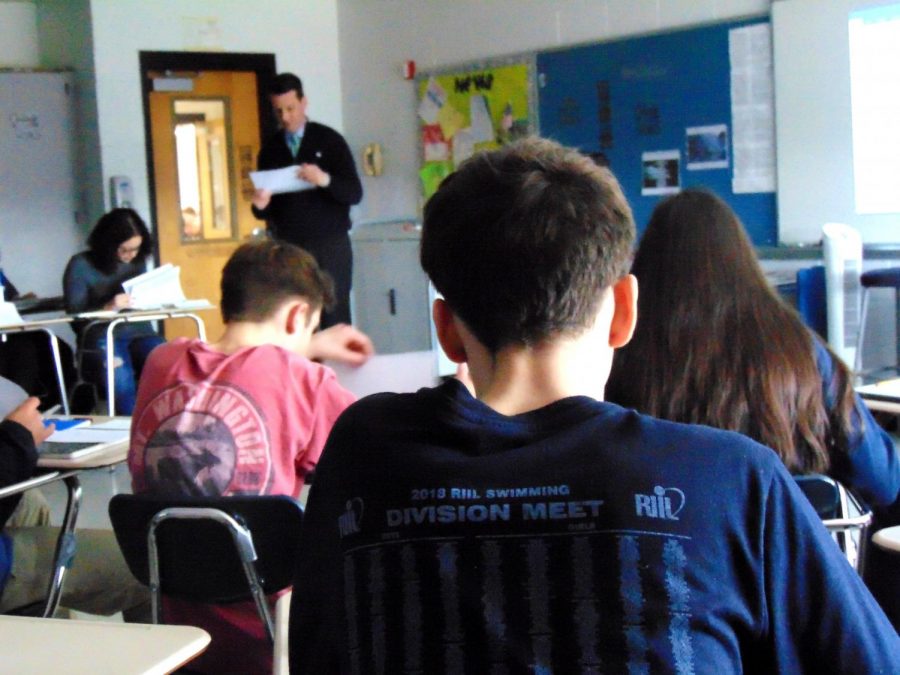 When thinking of Principal Kevin McNamara, many students picture him in the hallways interacting with students and making sure they are where they need to be. They imagine him heading up a committee meeting, talking to parents, or sitting at his desk handling one of the many duties that being a principal entails. With so many jobs to juggle, it is sometimes easy to forget what Mr. McNamara is at his core: an educator.

Mrs. Lisa Cardarelli’s period D Honors English 10 was able to experience this side of him first-hand when McNamara made a guest appearance one recent Friday morning. “Mr. Mac sent out an email asking if anyone wanted to team teach with him,” explained Mrs. Cardarelli. “I thought it would be a great opportunity for me to learn and grow. I am also very proud of my kids, so I wanted Mr. Mac to have the opportunity to see my kids in action.”

As the students in period D filed into their seats, McNamara began passing out pieces of paper for each kid to use as a place card. Once everyone was in their place, McNamara kicked off the lesson by having each student write their names as well as the strangest thing they had ever eaten. McNamara proceded by going around the classroom and asking each person what their answer was. Giggles and curiosity rose with each answer, ranging from the relatively tame sushi to delicacies such as frog legs.

This activity was McNamara’s creative way of starting a discussion on “A Modest Proposal” by Jonathan Swift. The essay, a biting piece of satire written in regard to British policy towards the Irish in the 1700s, proposed that the starving Irish should sell their own children to the rich as food, and that the of eating young children was a delicious and nourishing remedy. The topic made McNamara’s activity a perfectly delightful segue.

Olivia Wodogaza, a sophomore in the class, said that “when we shared all of the weird things we have eaten and such, it was a blast. We were learning and laughing and connecting ourselves to a piece of work that would usually be dreaded.”

Following the strange yet entertaining introduction, Mr. McNamara lead the class in a high school favorite: Kahoot. After a brief warning against the use of “naughty nicknames,” the class excitedly raced to answer questions about the time period during which the piece of literature was written. McNamara took the time after each of the five questions to delve deep into the history of the period, truly bringing the work to life.

Finally, McNamara and Cardarelli finished off the lesson by starting a group discussion on the meaning of the work, how Swift conveys his point and even a connection to Tupac’s “Changes.” McNamara had no shortage of insightful questions, forcing the students to think about what they were learning on a deeper level than the average high schooler tends to entertain.

Overall, McNamara’s trip back the classroom can be seen as nothing other than a major success. It was a pleasant experience all around, especially for the students who were lucky enough to be in that class that period. “It was awesome,” said Wodogaza, “Mr. Mac fit in well with our class. He taught us while keeping the lesson interesting and fun. Instead of feeling like it was a lecture or something, it felt genuine. It wasn’t all about nonsense that sometimes enters a classroom, it was simply about learning and enjoying ourselves while doing it.

Cardarelli also thoroughly enjoyed the time she spent co-teaching with McNamara. “It was an awesome experience,” she said. “Obviously, my administrator was coming into my room; I was very nervous. But once we started teaching, a natural synergy emerged. Mr. Mac has a good rapport with LHS students, so the kids seemed at ease and comfortable with Mr. Mac teaching. For me, the benefit was an opportunity to learn and grow from a amazing teacher. My kids got to see Mr. Mac as an educational leader and teacher, not just a disciplinarian or a suit.”

McNamara himself tweeted about the experience as well: “Some thoughts on teaching a lesson today 1. I was really nervous. It’s good to step out of your comfort zone. 2. It’s really obvious when teachers have established meaningful rituals and routines.3. The importance of classroom culture can’t be underestimated. Kids took risks!”

Although he has many important jobs as the principal of Lincoln High School, Mr. McNamara is a teacher at heart.