Wildgoose teaches us how to live 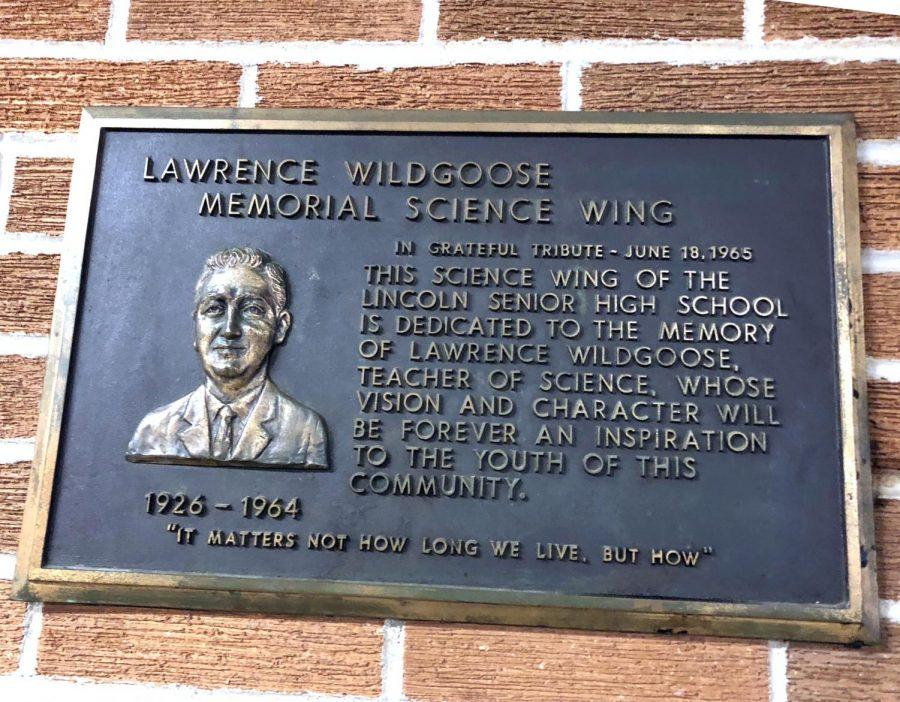 “It matters not how long we live, but how.” That is a quote engraved on the plaque dedicated to Lawrence Wildgoose at the entrance to the 210s hallway from the gym. While the words were actually said by the poet Philip James Bailey, they were selected to immortalize the man.

If hearing that there is plaque dedicated to someone outside of the main gym warrants the response, “Wait, really?” you aren’t alone. Many students and faculty alike seem to have no idea that the plaque even exists, let alone anything about the man who it’s dedicated to.

Over time the plaque has become dull and smudged, however, the contrast between the black slate and copper bordering and lettering really should make it stand out. Yet the positioning of the plaque doesn’t draw attention, with it being tucked between a trophy case (which nearly always casts a shadow on it) and the entrance to the 210 hallway.

The dedication doesn’t give too much information about the man on its own; it mentions that Mr. Wildgoose was a science teacher who worked for the high school and lived from 1926 to 1964. Other than that there is nothing which can be directly gotten from the plaque other than that he was influential enough to have a landmark in the school made for him.

The plaque also mentions that it is “dedicated to the memory of Lawrence Wildgoose… whose vision and character will be forever an inspiration to the youth of this community.”

However, as it seems, that may not be wholly true: at least 53 years after the plaque was put into place and 54 years after the death of the man its dedicated to, very few know who he was. Or perhaps, that’s just how it may seem.

Obviously no students would know about him. Even with teachers knowledge about him is lacking, which makes sense, what with him passing away before many teachers were born, and long before they began teaching.

However, he is not completely forgotten. Former LHS history teacher Mr. Michael Allen was a student of Wildgoose and spoke highly of him, saying that he “really was able to make science engaging.”

Other people around the community who had him as a teacher also speak very well of him. They emphasize the idea that he was a kind and charming man. According to many, he was able to get people engaged in school and he could make science fun. One former student of Wildgoose, Rosie-Marie Eckes, remembers a demonstration he once had in class:

“[We] had to do with a vacuum created in a test tube. I remember inserting a stick (like a coffee stirrer) into the test tube which suddenly created a small explosion and fire on the stick. It made enough noise to scare me… I jumped out of my skin and everyone started laughing.”

She goes on to recall that “he was a nice person, always so friendly” and then she reflects on his death.

“I do still remember… feeling bad because he was so nice, and bad for his wife; and thinking how young he was,” she said, which is a sentiment that many people who knew the man in life carry.

Lawrence Wildgoose in essence was in many ways nothing more than an ordinary man. He was kind to all, and cared very deeply about the education of his students, not only making their learning complete but also interesting and enjoyable. Wildgoose was a beloved teacher, one of those educators who seem more like a friend than an instructor.

It is somewhat common for people to think that dedications are meant to commemorate people who do great things in life. People who belong in history books for shifting the course of the Earth and humanity. There is no better example than the town of Lincoln itself, named in honor of the president who lead the country during some of the most tumultuous times in America’s history.

However, for every name who deserves to be remembered for the great things, there may be hundreds of people like Lawrence Wildgoose. People who simply went about their everyday life with a friendly disposition and positive, caring behaviors. People who may not have changed the world, but did change a person, or class, or maybe even an entire high school.

And that is who Lawrence Wildgoose truly was, a man who bettered the people around him and who sadly left the world early, but not before leaving his mark on the world around him. So whenever you pass the dedication to him outside the 210s hallway, in its shadowy nook to the side of a trophy case, know that, as the plaque itself says, how you live can matter far more than how long you do.