What Happened to the Gym? The truth about the soggy floor 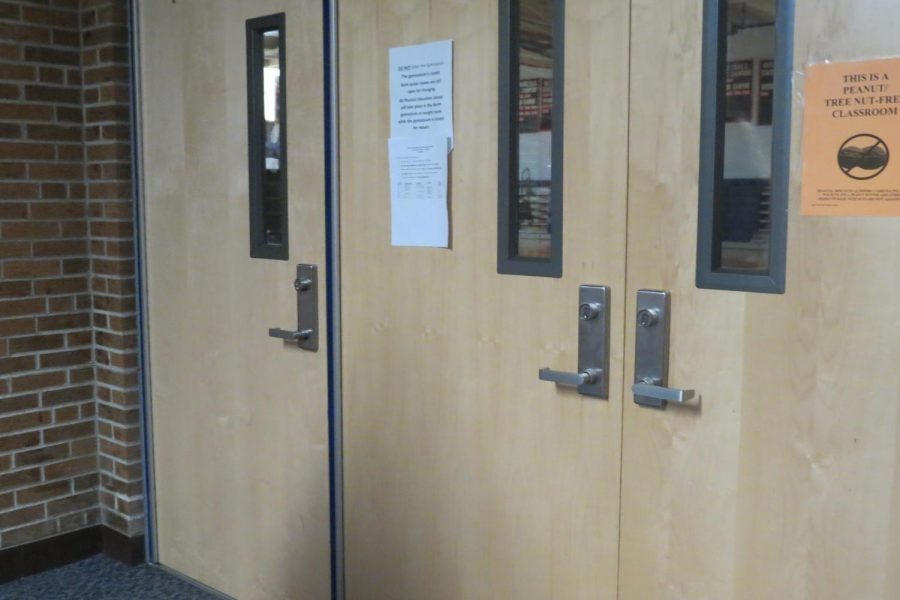 Lincoln High School’s main gym has been out of commission for the past month due to an issue with the flooring caused by a leak from an unspecified location following one of the many nor’easters that have hit New England in 2018. Gym classes, sports teams, and the Freshman Frolic and Sophomore Hop have all been forced to move to other locations, and as of right now, it’s still unclear how long they’ll have to remain there.

The issue is not, contrary to popular belief, exposed asbestos. “There’s asbestos in lots of different places in the building,” said Principal Kevin McNamara, “but there’s not a remediation that has to take place in the gym right now.” The gym is, however, “prepared, and it’s cordoned of,” he said, “to make sure everything’s safe, [but] it’s not an asbestos remediation. It’s the thing in the floor.” The asbestos is, however, to be removed April 7 and 8.

“The problem with the gym is that water has leaked under the flooring and warped it,” according to McNamara. This type of issue is “a long-term problem,” he said, “where intermittently around this time of year…condensation builds up and then bumps form in the floor, for lack of a scientific term.” However, this year, it’s a much bigger problem. “In years past, it’s been the size of like, a student desktop,” according to McNamara, whereas “this area is the size of probably half of a cafeteria table.”

The issue has had a large impact on the health and physical education classes, according to Unified Arts Department Chair Mr. James Frost. “Instead of just having one class rotate out into health,” he said, “three of us–myself, Mr. Orsini, and Mrs. Bedrossian–are all in health right now.” However, despite the need for up to three classes to be in health at a time there is only one health room. This has “impacted us a little bit,” said Frost, because “three teachers are trying to teach health. We’re all over the school now, in different rooms.” After the upcoming April vacation, all three classes will be done with their health component, and will be back in the gym. According to Frost, “if the gym’s not ready for that, hopefully we’ll be able to go outside.” For sports teams, “because it’s an insurance claim,” said McNamara, “the insurance company has been funding our attendance at Wide World of Sports and some other indoor facilities for the teams to get ready for the spring season.”

One gym class, however, has been in the physical education rotation during this whole situation. Mr. Dave Jordan’s class finished health the week that the problem was discovered, and since then, “they’ve been going to the north gym and the weight room, every single class,” said Frost. “They have to change in the locker room,” he continued, and “he’s the only teacher on, so he’s got to monitor both locker rooms, then meet everybody in the foyer, which means kids are out in the hallway.” He then “has to walk them down there and then walk them back every single class,” which means that “you’re losing a lot of class time.”

“We’re making do,” he added, “but it has impacted the time, [and] it forced us to alter our schedule for health, which is okay, but we’re hoping that the weather breaks so that when we hit April 8th we’ll be able to go outside.” The problem then “will be alleviated somewhat,” he said, “but we still won’t be able to meet in the gym until we get the thumbs up.” Attendance for all of the classes will have to be taken in the foyer, and “that’s going to be an adjustment at first to figure that out.”

As of press time it is still unclear as to how long it will take to fix the problem. “We have to wait until we find the source of the leak,” said McNamara. “If we can’t fix the leak, we can’t fix the problem,” and “the insurance company won’t let us fix the problem unless we know the source of the leak.” Once the leak is discovered, it’s “up to the insurance company,” and their “team that comes in to bring it back to normal conditions” to get it done. “It’ll be fixed before the renovation,” he added, “it’s not like something that we can just say ‘oh, we’re just going to leave it the way it is for two years,’ and live with it…it’s way too long before the gym gets redone,” and could “absolutely” be done this year.