Students make robots to find out how we work 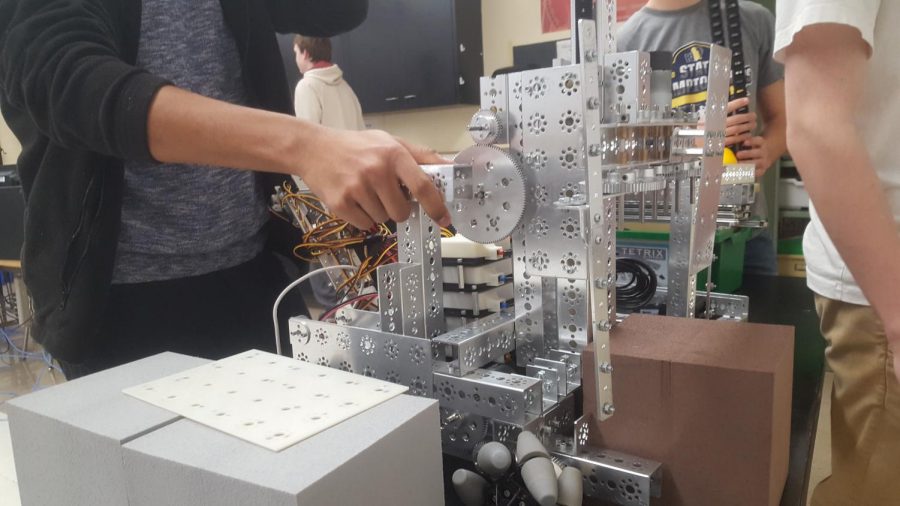 After what seems to be the longest school day in your life, you walk into room 220. Everyone begins to trickle in and gathers around beside you. The group discusses the day’s agenda: what needs to be built, what programming needs to be done, supplies to be ordered, requirements that need to be met. Once everyone understands what needs to be done, you break off to complete your job and start writing the program. As you complete your programs and others complete the electrical components, troubleshooting begins, and it’s like a well oiled machine. Everyone doing their part to help get the robot off the ground. This is a typical meeting of the LHS Robotics Team.

Every Tuesday and Thursday, the Lincoln High School Robotics Team meets in order to design and build their own robot. The team is open to anyone who wishes to participate, and is run by advisor Robert Gervais along with student leader Ryan Tougas. It began in 2016 when Tougas approached Gervais asking him whether or not it would be possible to create a club dedicated to robotics. Now, the team plans on partaking in the FIRST (For Inspiration and Recognition of Science and Technology) Tech Challenge where they will compete against other schools in the state to see whose robot can most successfully complete the common goal.

“The project this year is called Relic Recovery. The students have to do an Indiana Jones style project of reading a map on the wall with the robot and placing objects in a particular pattern with the robot in order to unlock their point value,” comments Gervais, “They also have to get a relic that is held inside the ring and place it in their safe location outside the ring.”

The students on the team took that goal, and determined exactly what they desired their robot to do in order to accomplish this goal. The students then worked together and delegated jobs so that the robot was created as efficiently as possible. Some people managed budget, some 3D printed specially designed pieces, some managed the engineering notebook, some programed, and some built the physical robot.

“Robotics Club isn’t just building a robot,” comments Gervais. “It’s really about everything you would need to make the thing happen. It’s like running a business: what is your goal, how do you make it happen, where do you get your funding, and then how do you apply your funding.”

Senior Kiran Thakur leads the programming team for the robot. He wishes to pursue a career in applied physics and finds the robotics team helps him harness some skills that he would need in the future: “I initially joined the robotics team with Kyle O’Hern and Ryan Tougas over a mutual ‘need’ for an environment where we could actively apply and grow our skills in designing and engineering. It has become a very meaningful part of my high school career since we started in 2016 because it has been a way for me to bond with my friends while simultaneously pushing my abilities as a designer and engineer.”

Senior Kyle O’Hern, who is part of the team that builds the robot, agrees with Thakur stating, “it is a place where I have the same mindset and interest as other people. It allows me to pursue my passion of designing and constructing things.”

This was the atmosphere that Tougas wanted to create when he started the club. “I [founded the club] because I knew that there were many students like myself who wanted some type of club where we could work on engineering and problem solving tasks, and work towards a common goal,” states Tougas, “I [then] got elected as the team leader because of my active involvement in the club. Because I started the club, I have been constantly involved in all of the matters of it, which lead the other members to choose me to continue leading it.”

Of course, none of this would be possible without the leadership from Gervais. “Mr. Gervais has guided us through the process of designing, providin g us with bits of insight as to where we should start with a design or an idea,” comments Thakur. “Overall,” he says, Gervais has been “a great help with letting us start up the team, and has also been a great teacher within the club and has helped us to keep our minds open to different ideas and engineering possibilities.”

Gervais tries to act as an advisor and mentor to the students, allowing them to problem solve and create the path in which the project should go on their own. He states that “My job is to help them make good decisions. It’s really not to tell them how to do every single step, but more to guide them towards the best solution and best method to get it done.”

Everyone on the team strives for greatness and works as a unit in order to produce the winning robot. It is a great way to learn a new skill or to sharpen any engineering skills. The team is open to anyone, and is always willing to teach someone new the skills that it takes to build a robot. Don’t be afraid to get your mind working and your hands dirty by joining the Robotics Team.