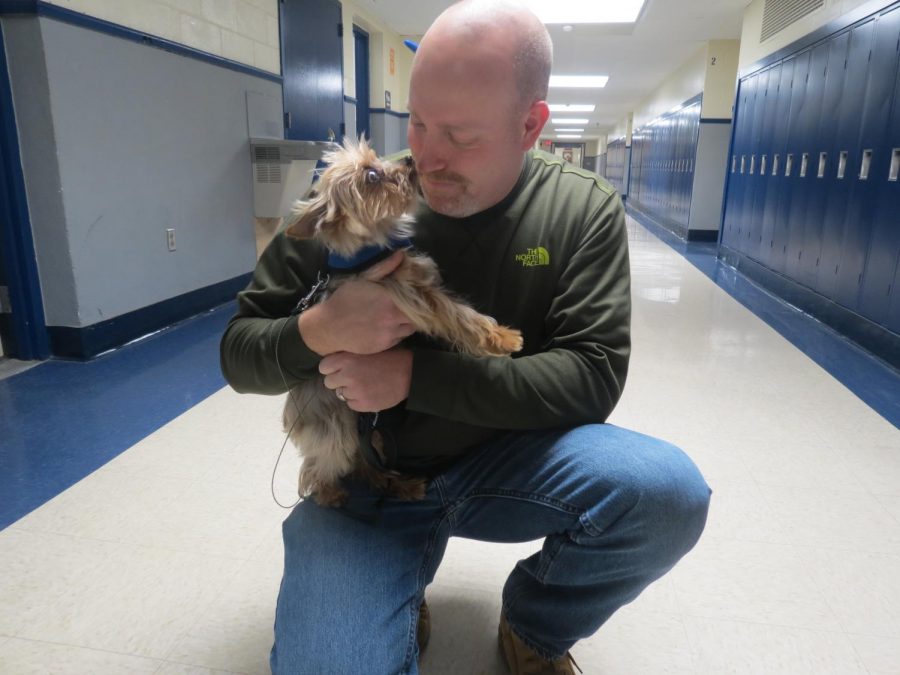 Like most people, I love dogs. And, also like most people, school stresses me out. It’s always a treat to see a dog roaming the halls of LHS, whether it’s Mrs. Anna Snow’s beloved therapy dog Mandy or Mrs. Jennifer Cameron’s lovely Labradors, Lucy and Fozzie.

At one point last year, while waiting for a ride after a Variety Show practice, I ran into Mrs. Doreen Picozzi and her dog, Myles. I instantly fell in love with the five-pound, elderly Yorkie, and since then, on a daily basis, I’ve asked how little Myles is doing. One day after school, fellow Lion’s Roar staffer Rachelle Bousquet and I were talking about how much we love dogs, and we asked Mrs. Picozzi (only somewhat jokingly) if she would be willing to bring Myles in for a day to see how having a furry friend present affects people in the school. She loved the idea of bringing Myles along on an exam day, and after securing permission from Principal Kevin McNamara, we prepared for our tiny visitor.

Myles (full name Myles Jagger Picozzi) visited LHS on Wednesday, January 24, during the week of midterm exams. I happened to have no exams that day, so during Mrs. Picozzi’s period E freshman English exam, I had the distinct privilege of spending the exam block with our guest.

At the beginning of the period, before the second bell rang, Myles was in the room with the freshmen, bringing smiles to their tense faces. Once the bell rang, we went across the hall to the broadcast studio, and our day began.

He missed his mom right away, sniffing at the door and pacing around the room. To calm his nerves, we went on a walk. Little Myles trotted down the skybridge, and we immediately ran into a delighted Mr. McNamara, who knelt down and had a chat with him. We saw an equally delighted Mr. Jay Schofield moments later. And while still a little timid, Myles was slowly warming up to his new environment.

After bringing him outside to do his business, I decided to try and show him what a normal day at LHS looks like. And for many of us, a normal day begins by signing in late at the Center. He was let go without a pass, probably somewhat due to the fact that he charmed everybody in the office. We went down to the cafeteria, where I usually go before class to hang out with my friends. Myles’ new friends included biology teacher Mrs. Joanne Phillips and nurse Mrs. Nancy Plummer (there were very few students in the cafeteria at this point, as very few people who didn’t have an exam were interested in being here that early). He even took a seat at a lunch table. He was getting a little tired at this point, so we headed back up to the studio, running into Mrs. Cameron and a few others on the way, all equally enamored.

Upon our return to the studio he passed right out on the floor, a few feet away from his bed. He was only down for about 30 seconds, however, before getting back up and prancing around the room again, nibbling on his food and having a bit of water. Myles got the true advisory experience: sleeping and eating. I turned on the monitor in the studio to show him how to run the announcements, and while he was an eager student, this active little fellow wasn’t too interested in sitting still to learn how to press buttons. He paced around again and then took another catnap (pardon the term). Soon, it was clear that he was getting restless again, so we made a trek down to Mr. Ronny Almeida’s class, where all students had finished their exams.

On the way we stopped in the cafeteria, now with many more students. Senior Cameron Deustch, who was waiting to take his English exam, told me that Myles was “very cute” and that he made him “feel a lot better,” even though he was “petrified” of his upcoming exam. Junior Colleen Farrell agreed–when asked if she enjoyed seeing him, her response was “oh my God yes.” The students in Mr. Almeida’s Legal Studies class were all smiles, and even Mr. Almeida himself cracked a smile and enjoyed Myles’ company.

As this first exam period came to an end we returned to C215 to bring Myles back to his mom and to hang out during the next exam, which happened to be a journalism period.

Most of the students were already done with their exams, and students still working were nearly done, so Myles had a lot of company.

On our way back up he elicited smiles and laughs and pets from many students in the hallway of the Old Middle School. He was thrilled to see his Mrs. Picozzi again, and we moved his bed, food, and water across the hall so he could rest with his mom and his new friends in the classroom. After ninety minutes of being a high school student, he was wiped out. And honestly, I can’t blame him. I joined him in a little rest for about half of the second exam block that day, resting my head on his dog bed (which he barely fills).

He woke up and we were back on the move, this time with Bousquet and broadcast student Kristen Laliberte, walking to see Spanish teacher and dog lover Ms. Clara Medeiros. Anyone who knows Ms. Medeiros — who has several dogs of her own — can only imagine how thrilled she was to see Myles. He recognized her immediately as a friend.

“Where’s his coat?” she asked, “he must be freezing!” She scooped him up and wrapped him up in her sweater, much to the delight of seniors Olivia Genesse and Jayce Beaudette, who stopped in the hallway to visit the furry guest. After assuring Ms. Medeiros that we would keep him warm (even wrapping him in my jacket to prove it), she bid him farewell and we returned to the classroom, running into Farrell and several other happy students on the way back. Myles, once back in C215, paced around a bit, and went back to sleep. The bell rang, and my time with him was (sadly) complete. He remained with Mrs. Picozzi for the rest of the day, however, as she graded exams, attended the teacher potluck and even a meeting with Principal McNamara.

Without a doubt, Myles charmed everybody in Lincoln High School, including Superintendent Georgia Fortunato. And it further proved to me that having dogs in school improves every aspect of the school day, for both teachers and students alike. Farrell told me that having him there made her day “Oh my God so much better. Midterms were really frying me,” she said. “The school play was coming up, and I had a lot on my mind.”

Myles’s impact on LHS is not a fluke.There have been numerous studies that show that dogs have a positive impact on people as a whole as well. Business Insider cites studies that show that petting dogs reduces the production of cortisol, a hormone that produces stress, in the human body, and that it increases oxytocin levels, which, according to the article, “promotes feelings of bonding.” Similar studies show that dogs can actually help young children learn to read by providing a listening ear that won’t (pardon the pun) bark at them when they make a mistake. Couldn’t that be applied in high schools as well? Therapy dogs have been popping up at colleges (and high schools including LHS with our friend Mandy) during exam seasons to relieve stress. Their powers of dogs can certainly be useful here year-round.

But beyond the words and testimonies of those who were happy to see Myles, beyond the studies and statistics, there is one measure of the joy that he brought that proves more than anything else. And those are the bright, excited smiles that I saw on the faces of every single person that met him that day.