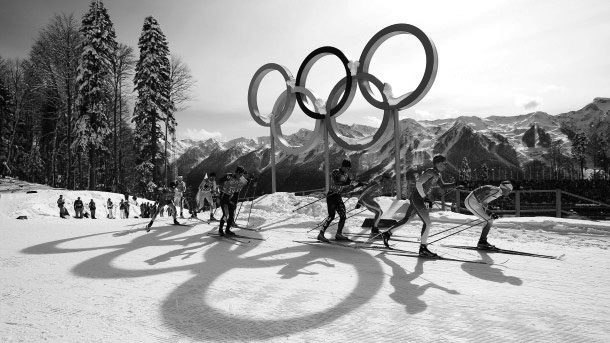 SOCHI, RUSSIA - FEBRUARY 19: (R-L) Emil Joensson of Sweden, Iivo Niskanen of Finland, Maciej Kreczmer of Poland and Simeon Hamilton of the United States lead a group past the Olympic rings as they compete in the Men's Team Sprint Classic Semifinals during day 12 of the 2014 Sochi Winter Olympics at Laura Cross-country Ski & Biathlon Center on February 19, 2014 in Sochi, Russia. (Photo by Richard Heathcote/Getty Images)

It’s that time again, when we snuggle in our robes and pretend to be experts in figure skating, slaloms and snowboarding. The Winter Olympics will kicks off the 23rd winter games on February 9, and continue to amaze and entertain us through February 25.

Hosted in Pyeongchang, South Korea, the Winter Olympics will award 102 medals to dedicated athletes of the winter events.

The athletes in Pyeongchang will be competing in a wide variety of events including biathlon, bobsleigh, curling, ice hockey, luge, skating and skiing. This year four new events have been added. On the slopes, there is big-air snowboarding and freestyle skiing. On the ice there will be speed skating and mixed doubles curling. The jam-packed two weeks will bring together just under 3,000 athletes from 92 nations who hope to bring home the gold, not only for themselves but for their countries.

As with any Olympic Games there are always athletes to watch and names to remember. Each time athletes meet up for this annual event, they make their mark in the games. In the past, superstars have been born. The Summer Olympics, for instance, introduced us to amazing standout athletes such as Simone Biles and record-breaker Michael Phelps. In the games coming there are some more athletes to watch out for.

Nathan Chen is an 18- year-old figure skater from Salt-Lake City. In both 2017 and 2018 he has claimed the National Championship. Chen is also the undefeated men’s skater in the world this season. If Chen takes gold, he will be the youngest male skater to take gold since 1948.

Another athlete expected to make her mark is Mikaela Shiffrin. Shiffrin is a 22 year old skier from Colorado. She took gold during the 2014 Sochi Olympics. Shiffrin excelled during this year’s World Cup circuit. She won five out of seven races that she competed in. She also won these races by .75 seconds, which is a huge margin for skiing. Shiffrin saw the podium 15 times during the World Cup. With these wins under her belt, she is ready to take Gold in these upcoming Olympic Games.

Our modern Olympic Games have ancient roots. The international sporting event, offering both winter and summer events in which thousands compete from around the world, are considered the globe’s foremost sports competition. Games are held every two years, but alternate seasons. As a result winter games are held every four years, as are summer games.