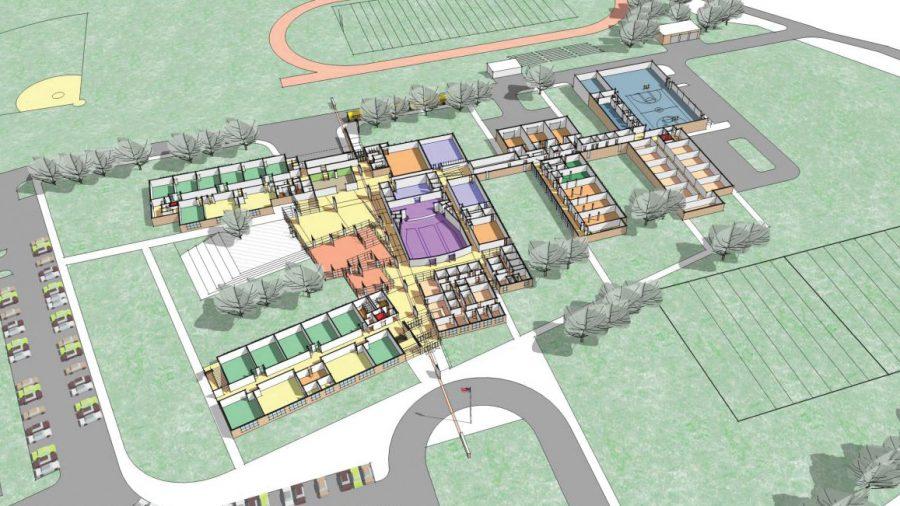 After years of planning, discussion, and disagreement, the plan to add to and renovate Lincoln High School is complete. Residents voted overwhelmingly on November 7th to approve the bond (up to $60 million dollars) “for the purpose of the construction, renovation, rehabilitation, repair, improvements, furnishing and equipping of and/or additions to Lincoln High School, relocation of School Administration Offices, and school facilities in the Town of Lincoln,” as quoted directly from the ballot. The town held informational sessions at various places around town (including Town Council and School Committee meetings) describing all aspects of the plan in great detail, from timelines to taxes to traffic patterns.

The plans were designed by Massachusetts architectural firm SMMA. According to a powerpoint presentation from the firm, a long-term solution was needed to fix the “aging” building. The space also needs updates to make it better suited for twenty-first century learning, to make it more eco-friendly, and bring it up to code. An improved building, according to the presentation, will also “preserve a valuable community asset.”

Currently, LHS has many classrooms that are undersized, despite the building having “excess capacity.” The science classrooms aren’t as up-to-date and state of the art as many would like, and most classrooms in general aren’t laid out in a way that supports “project based learning.” There’s also not enough space for the music programs and the technology throughout the building is, according to SMMA, “inadequate in supporting educational needs.” In addition to these there are also other physical problems with the circa 1966 building, including leaking roofs, deteriorating bricks, and outdated heating and cooling systems. Rendering courtesy of the Town of Lincoln. This project will be adding around 68,000 square feet and renovating a further 101,000 square feet. Optimised to hold around 800 students, highlights of the new building will include new STEM (science, technology, engineering, and math) labs, a new dining commons and media center, and new “high bay technology” spaces, for the automotive and technical classes.

Set to be fully completed in August of 2021, this project consists of 9 different ‘phases,’ covering everything from design to construction to cleanup. Should the voters approve, the first phase (‘Design’ according to SMMA) will begin in December 2017, and will include early designs and different design packages. The second phase (‘1A’) will begin this summer, in which the front office, library, and some classrooms will be moved to the old middle school wing. The building will be prepared for the work and the bus entrance will be moved. Phase three (‘1B’) is set to begin in or around September 2018, with the major change then being the demolition of the connector, front office, and library. In phase four (‘1C’), the design package will be finalized, and the new dining commons, media center, guidance office, nurse’s office, and some new classrooms will be constructed. Starting in January 2020, the fifth phase (‘2A’) will begin, with the administration, guidance staff, media center, nurse, and some teachers moving into their new workspaces. The wing of classrooms built in 1994 (the C200s) will be vacated for renovations, as will the kitchens and loading docks. Phase six (‘2B’), which will begin in April 2020, will see the renovations of the auditorium, stage, and the music and art rooms. From June to December 2020, phase seven (‘3’) will see the construction and renovation of the band room, ‘high bay tech labs,’ gymnasiums, locker rooms, and the culinary areas. Phase 8 (‘4’) will see the demolition of the front classroom wing and the renovation of the central classroom wing and, if approved, the district offices. Finally, the final phase (‘5’) will see the demolition of the old middle school wing and extra site construction, and is set to be completed in August 2021–just in time for the class of 2022’s senior year.

The project is estimated to cost around $60,000, which is the amount of the bond that the voters will approve. Most of that money is for the construction itself and just around $10 million will go to fees, testing, expenses, furniture, technology, and contingencies, according to SMMA. RIDE (the Rhode Island Department of Education) is expected to reimburse between 35 and 38% of the cost. The current tax levy supports a cost of around $30 million, so in order to finance the project, a 2.75% tax levy would be imposed on Lincoln residents. Depending on the size of your tax bill, the increase would range from roughly $82 to $137 per year.

Principal Kevin McNamara is “very excited that the bond passed,” and feels “tremendously grateful to the community for its continued support of its children and the work done by the renovation committee to steer it towards successful passage.” While he mentions that the current building has “done a good job for the last fifty years,” it “needs an update to accommodate today’s learners and to be really the flagship that the community can be proud of,” adding that he considers it “really important that Lincoln High School make plans to educate students for the next 50 years.” The upcoming renovations, in McNamara’s eyes, are the beginning of a “new and exciting time in Lincoln High School’s history.”