The Lion's Roar • May 27, 2021 • https://lincolnlionsroar.com/643/opinion/bring-back-manly-men-an-exploration-of-toxic-masculinity/

“Bring Back Manly Men”: an exploration of toxic masculinity 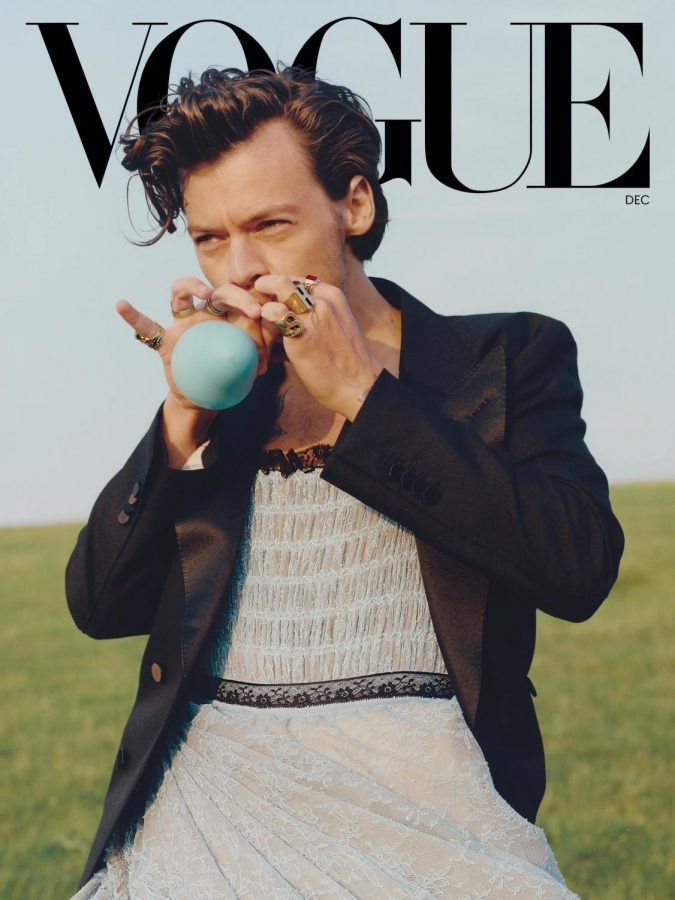 Lucy Kratman Not even a global pandemic can stop people from attacking those who break down barriers. On November 13 of 2020, Harry Styles made headlines becoming the first solo male ever featured on the cover of the fashion magazine, Vogue. The kicker? He was wearing a dress. Styles, the 26 year old singer sensation, has been exploring the fashion industry through his expressive outfits experimenting with femininity and masculinity, sometimes separate or apart. His boyband past stuck him in the conforming realm of teen heartthrob, his major audience being young teen girls who were in love with him. But as he grew, so did his expression and by the end of his One Direction days, he had abandoned the sagging pants and school-esce blazers in exchange for statement suits and flowery shirts with the help of stylist Harry Lambert. In March of this year, Styles posed on the cover of Beauty Papers nude save for a pair of fishnets and heeled loafers. In the second cover, he donned a full face of bronze makeup with a soft lip, smokey eye, and heavy contour. Other pieces in the Beauty Papers show the singer filtered in black and white, wearing a black bowler hat and white veil shielding his face. The campaign speaks of the lack of individuality in present society. On Instagram, captioning a video, the magazine wrote “Introducing Mr Harry Edward Styles who collaborated with #beautypapers in an issue that viscerally responds to the shrinking freedoms of our world with an explosion of individuality, creativity, diversity and unity.” The video showcases Styles reciting people in the media like Ray Charles while also listing random words and apologizing for being tired to someone off screen, his grin peeking through the serious air. “I think if you get something that you feel amazing in, it’s like a superhero outfit.” Styles explained to Vogue. “Clothes are there to have fun with and experiment with and play with.” Once the December issue of Vogue stocked shelves with a gorgeous shot of Styles in a field of green wearing a Gucci jacket and blue-mint lace dress, there were varying responses. While many praised the shot as gorgeous and stunning others, like commentator Candance Owens, saw it as an “outright attack on society.” Owens tweeted her distaste for Styles Vogue cover, calling to “bring back manly men” and labeling Styles’s outfit as a “steady feminization of our men.” People were quick to jump to the singer’s defense, beginning with his loyal fan base and continuing with celebrities including singers Sara Bareilles and Noah Cyrus, Netflix star Bobby Berk, and politician Alexandria Ocasio-Cortez. Once Styles posted a portrait of himself in a baby blue suit with lace trim while eating a banana (shot by Parker Woods) with the caption “Bring back manly men,” Owens continued her shaming undeterred. Her blatant disregard toward the steadying shift in society further exemplified her inability to accept the changing world. Luckily, the society she so clearly despised wasn’t afraid to fire back – and fire back they did. Olivia Wilde, Styles’ director in the upcoming film Don’t Worry, Darling, shot back “You’re pathetic,” while actress and activist Jameela Jamil told Owens that “Harry Styles is plenty manly, because manly is whatever you want it to be.” Politician Frangell Basora assured Owens that her comments that she has shown pride in has inspired violence against gender-non conforming persons. “It isn’t a discussion when people’s safety and lives are put at-risk,” Basora wrote, “This isn’t something to be proud of, @RealCandaceO.” Males and their femininity has been a long running debate, going back centuries. There are examples of toxic masculinity everywhere, and ingrained in our culture. Who hasn’t heard the phrases, “Real men don’t cry” and “Boys will be boys’? Gillette, a wide-known shaving brand, released an ad at the beginning of 2019 entitled “We Believe” discussing sexual harassment, misogyny and bullying while playing off of their slogan “The best a man can get”. A voiceover asked, “Is this the best a man can get?” Gender roles defined many generations. The societal norms of males have been under intense scrutiny, especially in the midst of the #MeToo movement. Although the role of women in society has grown from their one purpose of bearing children to being doctors, lawyers, politicians, engineers, etc, the role of men has been consistent as the tough breadwinners who cannot show emotion because it isn’t “manly”. Styles isn’t the first to challenge these norms and certainly won’t be the last. Jaden Smith has spoken about his decision to wear dresses and skirts, claiming it as his decision and his decision alone. Freddy Mercury of the band Queen has appeared in music videos dressed in a pink top and black mini-skirt. Sam Smith, coming out as non-bianary in 2019, has frequently expressed their gender fluidity despite being trolled following a modelling suit where they modeled men’s clothing in late 2019. The same year, Billy Porter sent shockwaves at the Oscars with a tuxedo dress, Vogue describing the “sharply tailored tuxedo jacket overtop a full-skirted strapless velvet gown” as an “unapologetically fabulous gown.” “What women wear. What men wear. For me it’s not a question of that,” Styles told The Guardian. “If I see a nice shirt and get told, ‘But it’s for ladies.’ I think: ‘Okaaaay?’ Doesn’t make me want to wear it less though… I think the moment you feel more comfortable with yourself, it all becomes a lot easier.” Pictures: Harry, circa 2012: https://www.vogue.com/slideshow/harry-styles-fashion-evolution-over-the-years Harry Vogue cover, December 2020: https://www.vogue.com/article/harry-styles-cover-december-2020