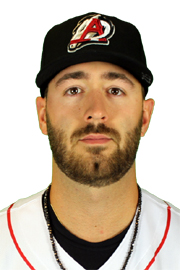 Nick Zammarelli will be a name that the town of Lincoln will never forget. In the class of 2013, Division 1 school Elon University took the talents of Zammarelli and expanded them for an even greater opportunity: playing in Major League Baseball. The first baseman had an advantage playing in Elon, has Zammarelli did not have to worry so much on how he performed in the field. When playing first base, the goal is to catch the ball thrown from your teammate with your glove with one foot on the bag. The priority is straight forward, and with that being said, Zammarelli had more time to focus on hitting the baseball. This clearly showed on the stat sheet, as from his first year (2014) to his third year (2016) at Elon, his batting average had risen from .284 to .342. A very impressive showcase for Major League teams to evaluate as for his three years playing college ball he finished with a .307 batting average, with 123 runs batted in (RBIs) in 158 games. History was made at Elon as well, as Zammarelli tied for first in school history in a single season with doubles, recording 24. A great third and final season secured a spot on an MLB roster, as the third baseman had earned third-team Louisville Slugger All-American honors. Three years after Zammarelli (and was celebrated for his first draft by Boston Red Sox on the occasion of his graduation), 2016 was a big year for Lincoln High School. LHS faculty and students past and present fixed their eyes on draft night for the MLB. With 40 total rounds in the draft, many people wondered how long will it be for Nick Zammarelli to be drafted? Day one of three consists of rounds 1-2. Not expected Zammarelli to be drafted that early, no disappointment was felt after the first night of the draft had ended from fans of the phenom. The next night turned out to be one friends and family of Zammarelli will never forget. Zammarelli was selected in the eighth round by the Seattle Mariners in 2016. This is a tremendous accomplishment as it is not easy being selected to play in a pro sport on any level. Hard work and dedication has clearly marked Zammarelli’s athleticism. And it continues to be. Nick Zammarelli has not let his foot off the gas pedal just yet. Getting drafted and getting paid the big money is not enough for the humble athlete. Zammarelli was working his way up to the Seattle Mariners roster. He has worked his way out of single A to double A (AA). On top of all this, on March 19, 2019, Zammarelli was assigned to the Mariners. It was realization of a dream, and it started in Lincoln Rhode Island. Nick Zammarelli has left a legacy in Lincoln Rhode Island, and serves as a friendly reminder that anything is possible. His legacy is used as motivation for former Lincoln baseball players, such as Domenic Cunha, who is currently playing college baseball at Wheaton University. A message that Zammarelli leaves to Lincoln shows how his impact to the town is big, “ For all of the students who look to further their careers into college and professionally I would just say that you need to stay positive and confident. I think what any high school athlete needs to understand is that because baseball is such a competitive sport, nothing will substitute for hard work. Like anything, you have to have passion to be successful. For me, in high school it was an everyday routine of hitting and fielding that eventually gave me the opportunity to play division 1 and professional baseball. I honestly believe it is something to have to work at every single day. “I view Nick as an outstanding athlete who showed even from a little town like Lincoln, as long as you work hard you can achieve your goals,” Cunha said. . “I’ve worked out with Nicky and he sets a great example for me to look up to.” Domenic’s leadership was very similar Zammarelli’s in a number of ways as was his work ethic. Despite playing different positions. both demonstrate the kind of mindset that it takes to reach goals and make dreams come true.