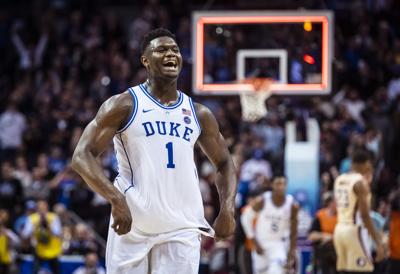 With sixty-eight teams total in the March Madness Tournament, the one team who will survive is Duke University. The Blue Devils are so talented that many people compare them to the Fab Five of Michigan, but Jalen Rose continues to back up his team saying that they were better, and would not start any Duke player over his teammates. Duke started out the season as the number four ranked team. They shocked a lot of people with a blowout win in their first game over Kentucky in early November, the number two ranked team in division one. They continued to win four more games in a row, but that streak ended with a two-point loss to Gonzaga, who is currently a number one seed. After this game, they continued to go on a winning streak but lost to Syracuse. Although they lost that game, they did not have Cam Reddish, their sharpshooter, due to sickness, and lost Tre Jones, one of the best on-ball defenders and facilitators in the country, because of an early injury. They later avenged this loss with a ten point win over the Orange, then went on another winning streak until they played their rival the UNC Tar Heels. This game against UNC was a tough loss for them, but the even bigger loss was losing Zion Williamson, the clear number one pick in the draft, due to a knee sprain in the first thirty-six seconds of the game. When dribbling he turned his knee and his foot went right through his shoe, which made Nike look bad. Duke, without Zion, lost to Virginia Tech a four seed, in a close game but made up for that with a win over Miami. It is believed, by many sports analysts, if Duke did not have any injuries this season, they would only have one loss to Gonzaga early in the year and unquestionably be the top team in the country. They finished their regular season against UNC, losing again without Zion Williamson, the first regular-season sweep since the 1900s. Other great teams contending this year are Gonzaga, Virginia, and UNC. These teams are great, but will not be able to beat Duke in the March Madness tournament. Looking towards the tournament, these teams will not outlast Duke and here is why. The first name to start with is Zion Williamson, he is a generational player that has the potential to be one of the greatest players in NBA history and is only in college. His impact on both sides of the floor showed in the six games Duke did not have him, their record without Zion was 3-3 and with him only lost two games the entire year. No one in college basketball can guard him and he showed that after winning the ACC Championship for Duke shooting over seventy percent. He has talked about his love for the game and for his teammates, saying in an interview, “I couldn’t let my brothers hanging.” So he will for sure come out in the tournament and go out for the national championship. The next name to be mentioned is Mike Krzyzewski, one of the greatest coaches in basketball history. Just to mention some of his accomplishments, five-time national champion, five-time gold medalist, a three-time coach of the year, two-time basketball hall of fame inductee, and fifteen-time ACC tournament champion. The greatness of Coach K’s career will for sure have an impact on this tournament, he will be able to lead the young freshmen along with what they have never experienced before. Then last but not least the rest of the players, players like Cam Reddish, RJ Barrett, and Tre Jones, have been overshadowed by Zion’s greatness. Reddish and Barrett will both be top five picks and Jones will go first round. These players have built the chemistry together to win this title. With Tre Jones coming up with the idea for the freshman to all go play at Duke, they knew what they wanted to accomplish. Also, they put to the side their draft stock to win, doing whatever it takes to win the national championship. The Blue Devils will not have an easy road to the national championship and will have to face teams like UCF, Virginia Tech, Michigan St, and Gonzaga to make it. This is a tough road for them but the only team that has proved to beat them at full strength is Gonzaga, and the players have gotten better and experienced more games since then. They will start this journey in the round of sixty-four against either NC Central or North Dakota St, which they will highly be favored in, and will show us how great they really are.